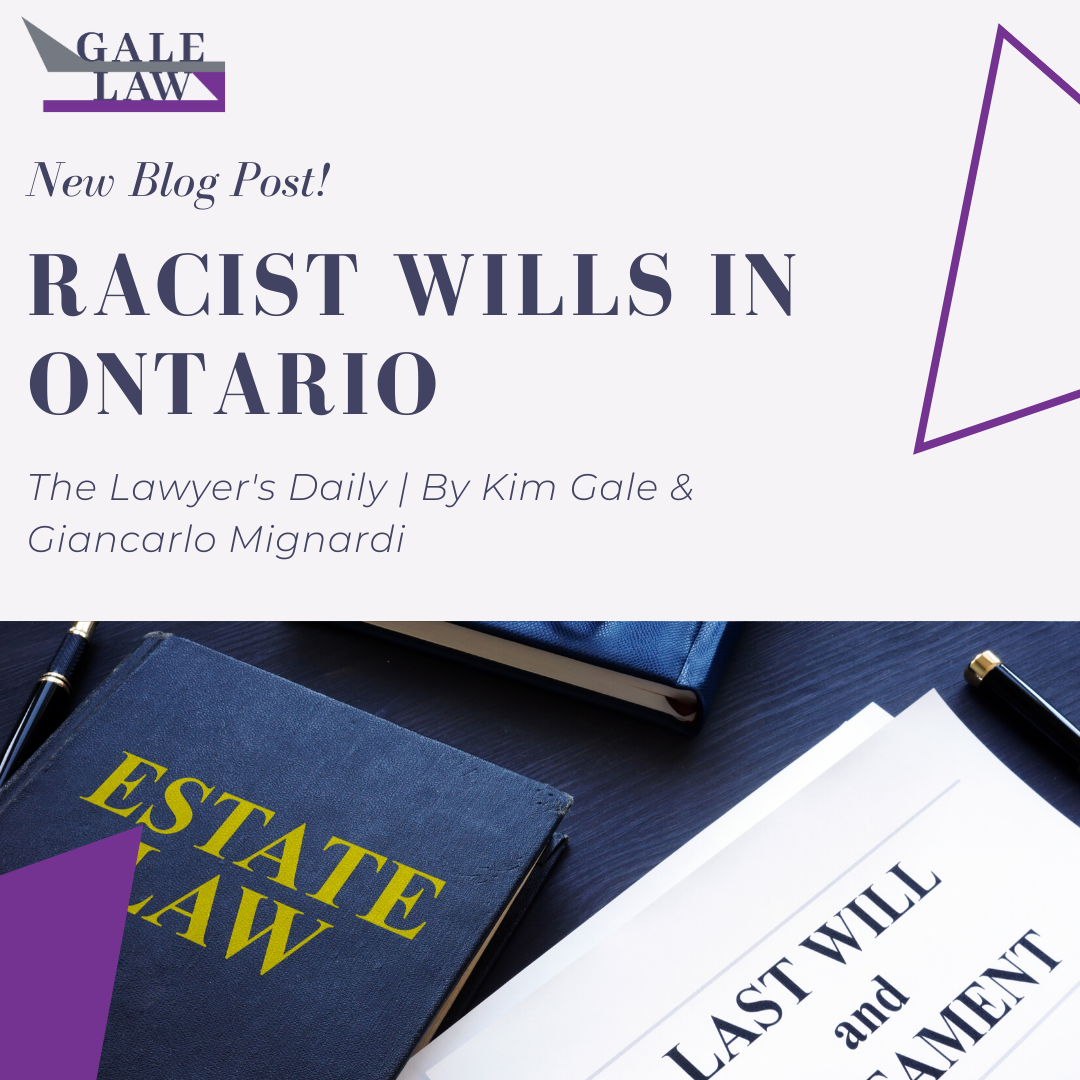 The Problem of Racist Wills in Ontario

The common law affords immensely protects testamentary freedom—the ability of testators to dispose of their property upon death as they please. Indeed, the current state of Ontario law is that testators may dispose of property in their will in a given fashion for racist, xenophobic, or prejudiced reasons. This is why it is often colloquially noted that “racist wills” are possible in Ontario.

It has been several years since Ontario’s highest court reaffirmed the sanctity of testamentary freedom along the above lines in Spence v BMO Trust Company.[1] Nevertheless, in this current period of societal unrest in which many groups are seeking ways to better identify and address systemic racism, it perhaps becomes an ideal moment to re-discuss the ruling in Spence and the balance that the common law has thus far struck between testamentary freedom and discrimination. And, while the Ontario courts have so far rejected undermining the protection the common law affords to testamentary freedom in the context of private dispositions in a will, should there be legislative action in this sphere?

In Spence, the Ontario Court of Appeal (“ONCA”) delivered a strong statement in support of testamentary freedom.

The case stands for the proposition that:

Spence involved two key parties: the testator who is Eric Spence, and his daughter, Verolin, both of whom were black. Eric Spence had left his estate to his other daughter, Donna, and her two sons. A dispute arose when Verolin had a child with a white man. He ceased communicating with Verolin during the final 11 years of his life and also updated his will to completely exclude her.In his will, Eric specifically excluded Verolin, stating in it that “she has had no communication with me for several years and has shown no interest in me as a father.” Yet, Verolin and her father had in earlier times been quite close, while Eric and Donna had virtually no contact over many years.

Verolin brought an application urging the court to look deeper into the Spence family affairs. She argued that her exclusion from the will was for racist reasons and should therefore be void for public policy. A lifelong friend of Mr. Spence even testified that his true reason for excluding Verolin from his Estate was that the father of her son was white. Mr. Spence had apparently raged that he had no further use for Verolin and her “bastard white son”, and that he intended to exclude her from his will because of her life choice. These racist intentions were reported also by other family and friends who had knowledge of them from personal conversations with Mr. Spence. However, as the above suggests, they were not detailed in his will.

The Superior Court of Justice agreed with Verolin, finding that Mr. Spence’s reasons for disinheriting his daughter were based on clear racist principles, and that the provisions of the will offended “not only human sensibilities but also public policy”. The will was invalidated at first instance on this public-policy basis.

The case, though, was successfully appealed to the ONCA in 2016. Mr. Spence’s will of course did not contain any clauses that were expressly racist. As the will was unambiguous, the Court of Appeal held that there was no reason to consider any other, “extrinsic” evidence about Mr. Spence’s motivations. Mr. Spence’s testamentary freedom in such circumstances dictated that, when the will demonstrates clear and unambiguous intentions, these intentions should be respected during the distribution of the estate, even if their underlying motivations had been distasteful.

Practitioners in this sphere often mention that there are practical reasons why protecting testamentary freedom in this fashion can be described as necessary. For one, if arguments like Verolin’s were to succeed, estate litigation would surge because third-party extrinsic evidence about a testator’s underlying motivations would increasingly be admitted and scrutinized. Further, consider this hypothetical: What if a parent did not leave a gift … for an independent adult child because the child struggled with a drug addiction and was liable to squander his inheritance? Addiction is a mental illness and therefore the will may be found to be discriminatory on the basis of disability. Indeed, such situations may prove frustrating to testators and could constrain testamentary freedom in awkward ways.

Legislative action or investigation in this area would help to spur further advancements in Ontario’s ongoing battle to better identify and address systemic racism. A major reason why testamentary freedom is so assiduously protected in the courts is because of the centrality of property ownership in our society. We view the freedom to use and dispose of our property as a core fundament of our liberal democracy. And yet, maybe this is what makes legislative change in this area so desirable to consider.

If inroads could be made in this area so that such things as “racist wills” received less legal protection, then it could introduce major changes in the ways that property owners dispose of their property. In other words, introducing progressive improvements or recalibrations to some of the core foundations of our society, while difficult, may be a means of introducing the most impactful change.

In this current period, where we find ourselves as keen as ever to identify the various ways in which systemic racism is caused and perpetuated in our society, perhaps it is high time for our legislatures to review and reconsider the balance Spence struck between testamentary freedom and discrimination.