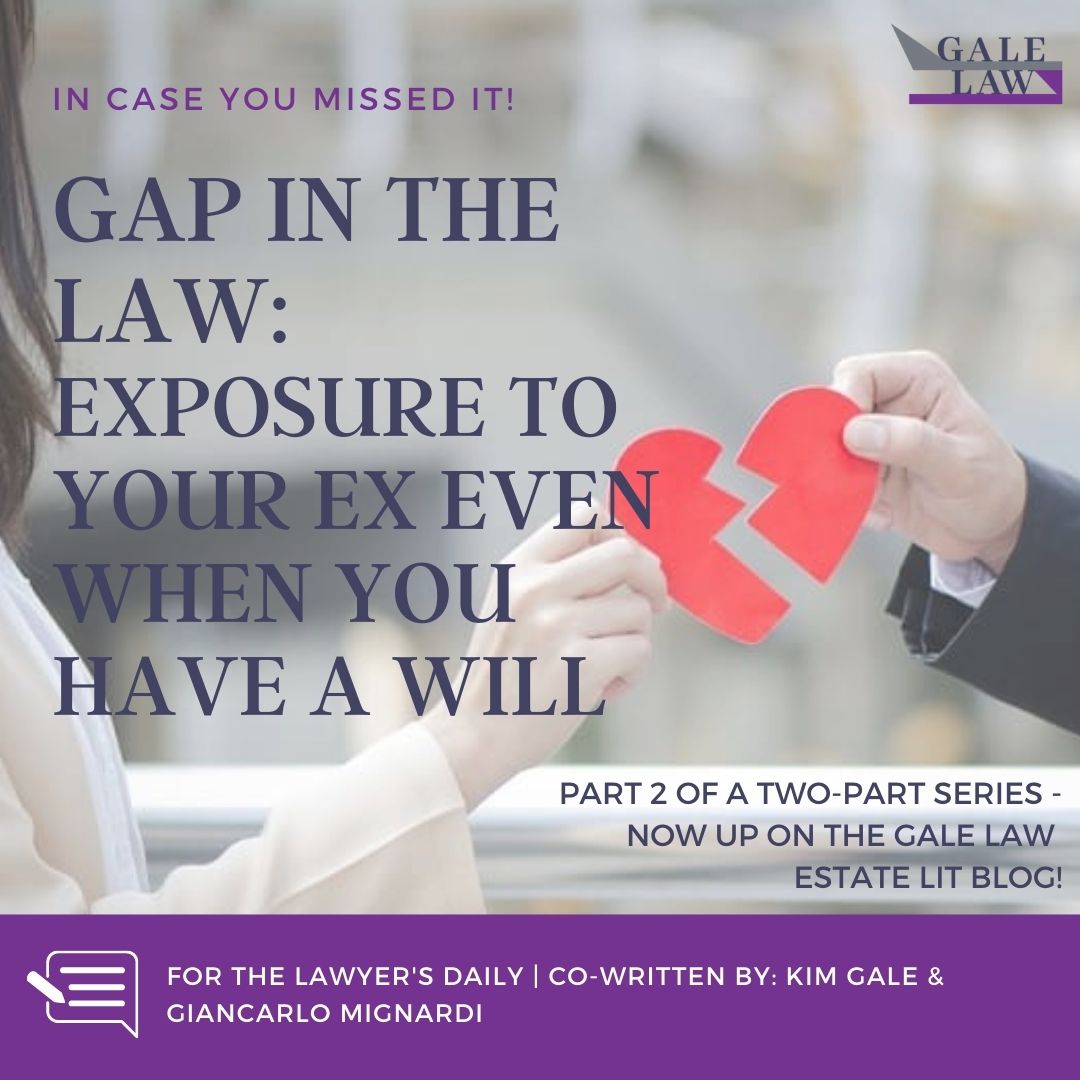 Gap in the law: Exposure to your ex even when you have a will

In part one of this series we discussed the significant and often unexpected problems that can arise when a separated spouse dies without a will. We noted how such discussions are important given the significant proportion  of  Ontarians who simply have not executed a will.

In part two, we would like to talk about another “cohort” of separated Ontarian spouses – those who have a will but have yet to update their estate plan following separation. As you can imagine, this situation, too, is one that can produce unintended and frankly messy results if such   spouses were to die while separated.

And yet, the effects of dying during a period of separation without having updated your estate plan can create immense and unintended problems.

Many Canadians assume that the act of separation in itself triggers legal changes to their will and estate plan. This is incorrect. In Ontario, the Succession Law Reform Act (SLRA) automatically revokes gifts in a will to former spouses upon a subsequent divorce, and such former spouses are deemed to have predeceased the testator who made the will. But, again, they apply to married couples who have formally divorced , and not separated spouses. A couple choosing to separate is distinct from the obtaining of a formal divorce and will have no impact on your will .

Notably, any gifts in your will to married-but-separated spouses or to former common law spouses remain valid after separation.

Generally, such gifts can only be revoked: by executing a new will removing the gi ; by executing a separation agreement which clearly and cogently addresses rights regarding  each other’s estates;  or the obtaining  of a final divorce. Of these options, the most effective (and very likely the quickest) way to prevent your separated spouse from taking under your now outdated will is to make a new one.

You can change your will really at any time following separation – you do not have to wait for a separation agreement to be executed and/or for property claims by your former spouse to be finally resolved.

That said, updating your will to remove your spouse may not completely disentitle him/her from making claims against your estate upon your death. You should be aware that:

So, while it is critical to update your will upon separation, such an action does not “wash your hands” of existing or future (court-ordered) obligations  found to be owing to  your spouse after you have   died. These potential obligations should be discussed with your estate planners so that you may be better informed about how to plan for them (e.g. through such things as insurance products which  may be available to cover such obligations).

Of course, your will is but one component of your entire estate plan, which may likely include, among other things, beneficiary designations (e.g. RRSPs, TFSAs, life insurance), jointly held property with embedded rights of survivorship, powers of attorney and family trusts.

As with your will, the act of separation has no automatic legal effect upon how these other significant components of your estate plan are structured/designated, and separation agreements and family property settlements tend to deal  with some, but  not  all, of these  will substitutes. They  therefore also require immediate and individual consideration from you and your estate planner.

In many cases, addressing other components of your estate plan is just as critical as updating your will.

To provide one example, in study and in practice, we have come across too many unfortunate cases  in which someone dies with several beneficiary  designations still in favour of his/her separated spouse. Generally, court cases on point have consistently held that these existing designations will mean that the subject accounts/policies will pass to the separated  spouse –  something that is likely not in line with the deceased’s intentions . Even if you have signed a separation agreement that is intended as a full release of any and all claims that either spouse has against the other, as it may not contemplate or otherwise may not be enough to deny your spouse proceeds of an account/policy for which he/she is the designated beneficiary.

If you are going through a period of spousal separation – and this pandemic has unfortunately been host to an uptick of such relationship breakdowns –  it  is important to consider the meaning and effects of separation in the context of your estate plan. Separation is an especially tricky time, and  you and your family law lawyer should always work with an estate planner during this time to ensure your intentions are fully met – in life and in death.

This is part two of a two-part series.