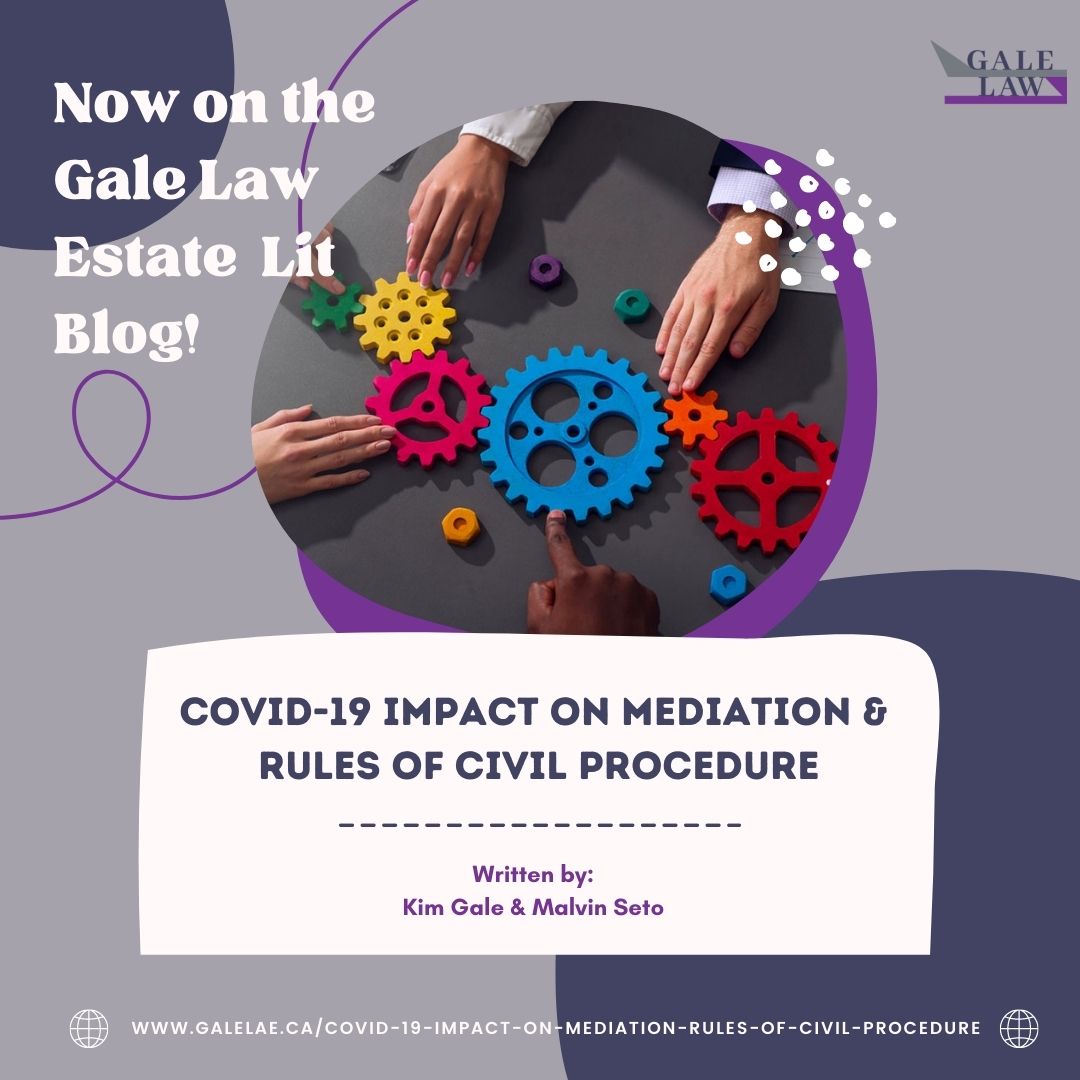 As COVID-19 continues to cause uncertainty and while impacting the economy and our lives so deeply, many predict that this global pandemic will bring an increase in matters being litigated.

“My experience has been, in my practice, that significant global events are almost always followed by litigation, and I expect that COVID is no exception,” says Linda Plumpton of Torys LLP, the Canadian Law Awards Litigator of the Year for 2020. She goes on to say: “You look at the tech bubble bursting in the early 2000s, then the Great Recession in 2008 I

expect that the COVID trend will be similar, and we’re already seeing that play out in a number of areas. My own view is that we’re really just on the cusp of what will probably be years of litigation to follow.”

This is supported by Statistics Canada, which documents the number of civil court cases per year in Canada and in the provinces individually. For Ontario, prior to the Great Recession in 2008, there were 259,374 initiated cases in 2007-2008. In the two years that followed,  initiated cases went up to 276,396 and then to 283,378. With an expected rise in litigation, mediation should be a considered forum for parties to resolve their legal matters before trial.

Rule 24.1.01 of the Ontario Rules of Civil Procedure (the Rules) states: “This Rule provides for mandatory mediation in specified actions, in order to reduce cost and delay in litigation and facilitate the early and fair resolution of disputes.”

These specified actions are further explained in Rule 75.1. In fact, for the City of Ottawa, the City of Toronto and the County of Essex, mediation is already mandatory for estates, trusts and substitute decision  matters under Rule 75.1.

Rule 75.1 states that, except in a contested Passing of Accounts, the applicant shall make a motion, in the same way as under R. 75.06 (which is an Application or Motion for Directions), seeking directions for the conduct of the mediation. Rule 75.1.05(2) states that the Notice of Motion for mediation directions is to be served within 30 days after the last day for serving a Notice of Appearance, and the motion may be combined with other motions.

The Rules largely remain the same for mediation with some interesting changes allowing for remote mediation. Prior to these changes, mediation was in person. This was an accepted practice, and any other form of attendance may have required a judge’s permission or threatened to halt settlement discussions. Now the  reference to in person has been revoked, allowing for virtual/remote mediation. A necessary change to permit mediations to continue as we navigate this pandemic.

Mediators should also note the change to sub rule 75.1.07(7) which states: “The mediator shall, immediately on being chosen or assigned, fix a date for the mediation session and shall, at least 20 days before that date, serve on every designated party a notice (Form 75.1B) stating the place, date and time of the session and advising that attendance is obligatory.” On Sept,1, subrule 75.1.07 (7) of the Regulation was amended by adding “and the method of attendance” after “the place, date and time of the session.” (0. Reg. 526/21, s. 5)

The benefits to mediation are countless. They include allowing clients greater involvement in the agreed upon settlement, confidentiality and certainty of the result. The main benefit to mediation is that clients will have an opportunity to settle and move on to the next chapter in their lives. Even if the parties do not come to a settlement, mediation allows for both sides to better understand the adverse position which increases the likelihood of settlement later in the litigation.

In times of uncertainty like a pandemic, mediation brings certainty. Now that mediations are permitted to be remote, they have become more accessible, and more parties should consider mediation even if it is not mandatory for them. 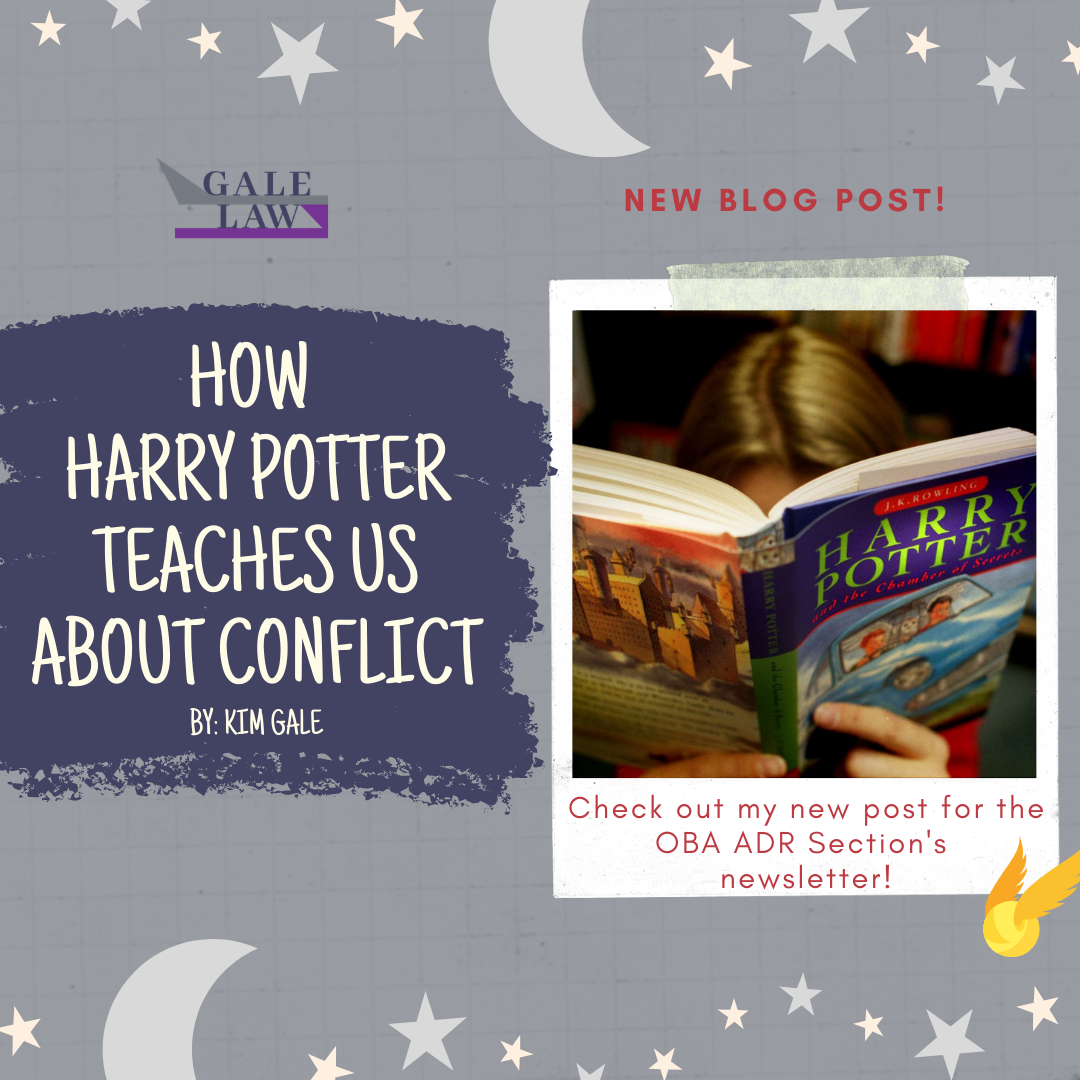 In Harry Potter, J.K. Rowling’s iconic seven-part fantasy series, the titular character studies at an English boarding school for wizards called Hogwarts School of Witchcraft and Wizardry, where he learns the magic he needs to navigate the wizarding world and defeat the evil Lord Voldemort. Bernard Mayer’s Wheel of Conflict and Resolution, which contains the five themes of communication (culture), emotions (power), structure (personality), history (data) and values, is reflected in the relationships between the characters in Harry Potter.

While the wizarding world and its characters are fictional, there are many lessons that can be gleaned from this series. The conflict and friction between “good” and “evil” bubbles to the point of a war in the seventh novel. Mayer’s Wheel of Conflict applies to the conflict. The overarching themes of culture, power, personality and data will be looked at to see how they play a role in explaining how the conflict grew into a war, and what could have been done differently to avoid this outcome.

Lord Voldemort is the villain in the novel and his main tactics of rising to power are to kill or intimidate others. Albus Dumbledore is the headmaster of Hogwarts School of Witchcraft and Wizardry and, along with Harry, Dumbledore is also the hero. Both Lord Voldemort and Dumbledore are said to be the most powerful wizards of all time, but each uses their power for different purposes.

Mayer bluntly says: “We are imperfect communicators.” Nothing more could be true in the entire Harry Potter series. Communication falls squarely under Culture as this is a factor that directly affects communication.

An aspect of communication that directly impacts Harry’s ability to resolve conflict is his own personality and biases. Notably, there is conflict between Harry and Severus Snape, who is a professor at Hogwarts and head of Slytherin. Slytherin is the house at Hogwarts for those who are Dark Arts followers. Voldemort was in Slytherin. Snape was a Death Eater and had the Dark Mark on his forearm, but he has claimed to repent.

As Mayer says, “we frequently rely on inaccurate or incomplete perceptions, form stereotypes, and carry into our communication conclusions drawn from former interactions or experiences.” Snape spies on Voldemort and pretends to be a Death Eater, and as he becomes more entrenched in the Dark Arts, it becomes questionable which side he is on. When Snape kills Dumbledore, it is implied that Snape is on Voldemort’s side.

However, as revealed at the end of the seventh book, Snape is good. Dumbledore is dying and he asks Snape to kill him so Snape can become Voldemort’s right-hand man and continue spying on Voldemort. This shocking twist shows the importance of communication and the issue of stereotypes. Overall, it is crucial that individuals overcome the culture barriers that lead to communication issues. We seldom blame our own communication shortcomings as a contributing factor of the ensuing conflict.

As Mayer says, “emotions are the energy that fuels conflict.” The handling of emotions in a conflict can be tricky, as Mayer cautions against people venting their emotions. Instead, he states that the wisest course is to contain emotions until there is a safe time for them to be vented. In fact, this may be the key to resolving conflict. When Hogwarts is being run by the Ministry leader, Professor Umbridge, who refuses to teach Defence against the Dark Arts despite the rise of Voldemort, Harry first openly questions Umbridge’s authority. The intense feelings of hatred Harry felt toward Umbridge and the emotional turmoil of being called a crazy liar could have led him to spin out of control.

Rather, Harry follows Mayer’s approach and lets his emotions out in “safe increments” by starting Dumbledore’s Army. This is a group he leads which teaches some students Defence against the Dark Arts in a safe space (in the Room of Requirement). This knowledge was key to Harry and his friends winning a battle against the Death Eaters at the end of fifth book.

The structure in which the issue develops is another source of conflict. As Mayer elaborates, these structural components of conflict include resources available, legal requirements, decision-making processes, and physical settings. The example provided is litigation, which Mayer says is a structure that exacerbates conflict and makes compromise difficult. Another example is voting, where the issue tends to become polarized and constructive communication may become difficult as candidates wedge issues to differentiate themselves from their rivals. The approach to campaigns increases divisiveness on complex issues such as gun control, healthcare or national security.

The structure of the wizarding world contributes to the rise of Voldemort in many ways. The Ministry’s control of the main newspaper, the Daily Prophet, allows them to communicate their own agenda to the masses rather than what is actually happening. Before Voldemort takes full control of the Ministry, the Ministry still under-reports the deaths and misleads the wizarding world regarding their efforts to stop Voldemort. The Ministry even imprisons a person as a “Death Eater” even though he is not one. The Ministry wanted people to think they were doing something about the rise of Voldemort even though their efforts were not enough to prevent a war. The Ministry’s structural issues allowed Voldemort to gain power and followers.

Dumbledore would agree with Mayer that “conflict cannot be understood independent of its historical context.” This is because Dumbledore spends a great deal of his time before his demise showing Harry Voldemort’s past to build his own psychological profile of Voldemort. Harry asks at one point: “Sir…is it important to know all this about Voldemort’s past?” Dumbledore says, “Very important, I think.” Mayer says the history of participants in a conflict as well as the system in which the conflict is occurring and the issues themselves has a “powerful influence on the course of conflict.”

It is through learning about how Voldemort came to power and his upbringing that Harry understands how to resolve the conflict and defeat Voldemort. Likewise, through Harry learning about his own past, he begins to understand the issues in the conflict. This includes the prophecy, where a coming boy would have the power to vanquish Voldemort. Once Voldemort hears the prophecy, he goes to kill Harry who he believes is the coming boy. Voldemort kills Harry’s parents but could not kill Harry. In the effort to kill Harry, Voldemort marks Harry as his equal and loses his powers. This historical knowledge is crucial for Harry to understand that he is in fact the “Chosen One” as widely publicized.

Mayer’s points of conflict along the wheel of conflict should be used as a framework to assist us to understand a conflict. We learn how a conflict can be affected by communication, emotions, structure, history, and values. It is also important to address conflict early before it results in catastrophic consequences. Voldemort is a symbol of a leader who is focused on being the most powerful wizard and who uses rhetoric that divides the wizarding world. By dividing and instilling fear in society, Voldemort is able to build an army of followers and gain power and control. It is crucial to understand that conflict is exponential and requires more than one person to fester into something more than mere disagreements, and just as Voldemort’s catastrophic rise didn’t happen overnight, the conflicts that are given time to develop regularly transform into disaster. As Dumbledore says, “It is a curious thing, Harry, but perhaps those who are best suited to power are those who have never sought it.”