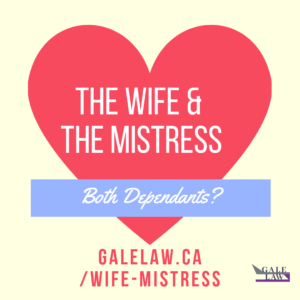 What happens when a man is married, but is in another relationship? Can their mistress be considered a dependant (in addition to their wife)?

The wife and the mistress

In the case of Prelorentzos v. Havaris (2015) the deceased had died at the age of 71 leaving behind his wife with whom he had separated from but never divorced. During the time of his separation, he lived with a woman named Helen whom he initially took in as an act of kindness as she had nowhere else to live. Helen claimed that she lived with him in the same household for about 9 years and that she was a common law spouse of the deceased.

The court noted that the only missing link in this case was whether Helen and the deceased had cohabited. The deceased’s wife claimed that even though they lived together, it was merely a brother-sister type relationship. The wife claims that the deceased always intended to resume his relationship with her and  this is why they never got divorced.

Justice Grace quoted Cummings v. Cummings (2004) and Tataryn v. Tataryn Estate (1994) and concluded in paragraph 233 that “moral considerations are important in this case.”

[111]   When faced with such an application the court is required to consider the interests of all dependants even if some of them seek no relief.   As Blair J.A. said in Cummings v. Cummings (2004) at para. 27:

When judging whether a deceased has made adequate provision for the proper support of his or her dependants and, if not, what order should be made under the [SLRA], a court must examine the claims of all dependants, whether based on need or on legal or ethical obligations.  This is so by reason of the dictates of the common law and the provisions of ss. 57 through 62 of the Act.

[231]   Non-financial considerations must also be considered.  Blair J.A. used the phrase “moral and ethical obligations” in Cummings, supra at para. 27.  At para. 40 of that decision, Blair J.A. addressed the need to consider such matters in proceedings under Part V of the SLRA.  He wrote:

In my view these questions have been resolved by the decision of the Supreme Court of Canada in Tataryn v. Tataryn Estate…There, the court held that a deceased’s moral duty towards his or her dependants is a relevant consideration on a dependants’ relief application, and that judges are not limited to conducting a needs-based economic analysis in determining what disposition to make.  In doing so, it rejected the argument that the “judicious father and husband” test should be replaced with a needs-based analysis: see para. 23.  I see no reason why the principles of Tataryn should not apply equally in Ontario, even though they were enunciated in the context of the British Columbia Wills Variation Act…in which the language is somewhat different from that of the Succession Law Reform Act.

The court decided that even though sufficient evidence was missing, Helen was still deemed to be the deceased’s common law spouse (by a very thin margin). Therefore, Helen was be entitled to support and was awarded $30,000.

In this case, the court did not focus on the fact that the deceased already had a wife. Rather, the court was concerned with the moral obligations of the deceased to provide support to Helen. It is evident that even though Helen was a “mistress” she was still deemed to be a common law spouse.

Judges are continually defining the limit and scope of dependants and who shall be considered to be a dependant still varies from case to case.