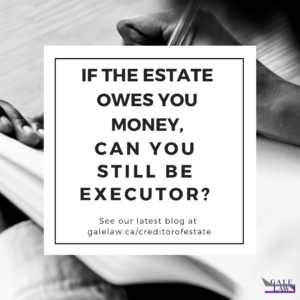 The issue we are addressing is whether you can act as executor of an estate that owes you money. If you are owed money, you would argue that you are a creditor of the estate.

There is no absolute law that prohibits a creditor from being appointed as an executor of the estate.

However, there is case law which deals with removal of an executor who was also a creditor when a conflict of interest arises and the beneficiaries object.

In the Supreme Court of British Columbia case Browne v Browne Estate 2014 BcSC 656, the parties were half siblings, and by her will, their mother divided the estate equally between the parties. After the mother’s death, and without obtaining probate, the respondent used the power of attorney for property document (which should have ceased upon death) to sell the residence for $750,000.

The respondent then applied one half of the net proceeds against her husband’s line of credit. She deposited the balance and through counsel made an offer of settlement to her half-sister to settle the estate without obtaining probate and conditional upon her half-sister not contesting her “suspect” accounting.

She claimed a total expenses of $257,000, which she felt entitled to due to the personal care she provided to the deceased for the last five years.

Her half sibling applied to the court and obtained an order removing the respondent as executor on the basis that she was unable to act impartially, that the accounting was at best cursory, and that the claim for expenses were largely unexplained without any supporting documentation.

The actions of the respondent demonstrated a “lack of fidelity” to the beneficiaries and underscored her potential conflict of interest because of her significant claim on the estate as a creditor (para. 52).

The court found that there were several reasons that would give rise to the removal of the executor and trustee. First and foremost was the potential for conflict of interest given that the executor/ trustee claimed to be a 53% creditor of the estate assets (to which the other beneficiaries disagreed). Also, it was a question of whether it would be difficult for the executor to act with impartiality (not whether she would or would not do so).

The court found that the respondent was in a conflict of interest because of her significant claim on the estate as a creditor.

This is simply a classic conflict of interest, for which the Courts will generally not hesitate to remove the executor/trustee on proper evidence.

Lastly the improper use of a power of attorney document to deal with assets of the estate, rather than applying for probate, was a clear indication of her unwillingness to act as executor.

[38] Lord Blackburn stated at 387:
In exercising so delicate a jurisdiction as that of removing trustees, their Lordships do not venture to lay down any general rule beyond the very broad principle above annunciated, that their main guide must be the welfare of the beneficiaries. Probably it is not possible to lay down any more definite rule in a manner so essentially dependent on details often of great nicety. But they proceed to look carefully into the circumstances of the case.

[40] As noted by Donovan Waters, Q.C. in Water’s Law of Trusts in Canada Fourth Edition at 898:
… it is clear that much will turn on the facts of the particular case, and it is only by an analysis of the cases that the manner of application of those guidelines can be seen. The dishonesty of the trustee is an obvious ground for his removal. It is the gravest breach of trust, but dishonesty can extend beyond the situation where the trustee appropriates the trust property for himself to the situation where he has a discretion as to the division of the fund between himself and … other persons, and allocates to himself the lion’s share.

[41] Courts are reluctant to remove an estate trustee. A priority is to respect the testator’s decision in appointing that person: Veitch v. Veitch Estate, 2007 BCSC 952.

[42] Animosity or hostility between an executor and a beneficiary is not sufficient on its own to warrant removal as an executor: Letterstedt at 389

Another case is Borisko v Borisko, 2010 ONSC 2670 where the court found it appropriate to grant a remove an estate trustee where significant allegations aroused the distrust and hostility of the beneficiaries.

The court stated that an application for removing a trustee was not a fact finding process. In its reasons, the court considered a number of allegations indicating a breach of duty or conflict of interest. The trustee was alleged to have tried to buy shares from the beneficiaries when he knew they were valued at nearly twice what he offered. He was also alleged to have withheld this information from the beneficiaries. The trustee was said to have refused to transfer the shares and dividends in a company to the family trust, but instead included the assets in the estate to increase the estate’s value and his compensation. These allegations, which were substantiated with evidence, were sufficient for the Court in this case to order the removal of the trustee.

The Trustee Act section 48 and onwards deals with the obligations of an executor to properly deal with creditors. If there is any question as to whether there is an actual debt or the amount of the debt, it could be argued that the executor in a conflict of interest.

Some other factors to consider would be: who are the beneficiaries, how much is the alleged debt and what is it for? Is it well documented and therefore not likely to be objected by the beneficiaries? Can it be proved that monies were actually advanced?