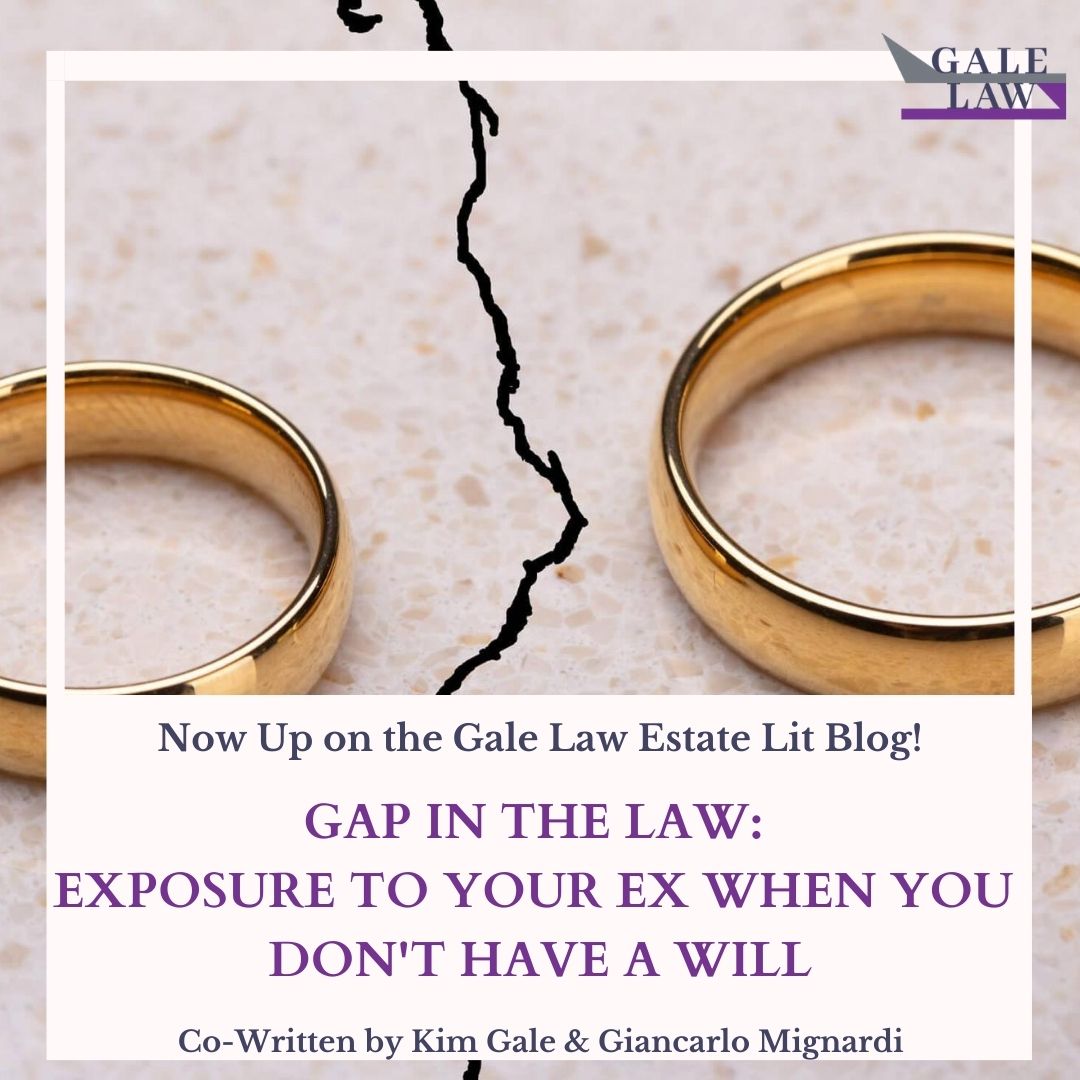 Gap in the Law: Exposure to your Ex when you Don’t have a Will

The pandemic has put relationships to the test – and not all seems to be passing. Spousal separations are expected to increase, with a likely spike in divorces when things get back to “normal”. What most may not realize is that between the time when couples say “its complicated” to the time they divorce, their spouses are still entitled to substantial portions of their property on death if they do not prepare a will.

Now that we are reflecting on our mortality (and if you’re reading this, perhaps your relationships), we must look at how we may be able to protect our assets in that thorny stage between separation and divorce, if we were to die. This is especially important to discuss when it is also recalled that, quite unfortunately, most Canadians either do not have an executed will, or have not updated their existing will in light of new life circumstances.

Many Ontarian spouses considering or in the midst of a separation may be surprised to learn that such separation has no legal impact for the purposes of Ontario’s intestacy rules as outlined in the Succession Law Reform Act (SLRA). The SLRA defines a spouse as “either of two persons who… are married to each other”, and does not contain any provisions which contemplate separate treatment for spouses who are still married but living in separation. This is significant when it is kept in mind that, per Canada’s Divorce Act, spouses are generally granted a formal divorce after at least one year of separation. In effect, this means that, during this sizable period of time, separated spouses are given no special treatment under the SLRA.

The intestacy rule in the SLRA are both well meaning and much needed. They are there to provide Ontarians with a “statutory will” for situations – of which there are unfortunately many – where one dies without a will, or where a valid will does not include provisions regarding the distribution of the residue of the deceased’s estate (“partial intestacy”). While the rules apply a one-size-fits-all approach, it is reasonable for the legislature to provide significant entitlements to surviving spouse in this way, as this is roughly in line with how a deceased spouse would have preferred and indeed desired to provide for the person to whom they have been happily married.

However, these preferences or desires do not hold so well in situations of separation, where spouses may be likely to want more substantial portions of their estate to be distributed to other parties. In such circumstances, the one-size-fits-all intestacy rules can significantly undermine whatever the deceased spouse’s intentions may have been and increase the likelihood of estate litigation among actual or potential beneficiaries.

In light of the above, the most obvious step for a separated spouse to take is to execute a will outlining their specific intentions regarding the distribution of their estate. However, the unfortunate reality is often that a spouse may die during a period of separation before they have had the opportunity to take this step. Situations like this may have indeed arisen during the COVID-19 pandemic.

Another step – and one which is very common – is for spouses to execute a separation agreement in which they release or vary their entitlements to one another’s estate. While this seems straightforward, and while courts tend to construe such provisions narrowly and accept them as valid releases only when they are “clear and ambiguous.” it somewhat goes without saying that such provisions do often lead to litigation. If you are contemplating entering a separation agreement, then, it is highly advisable that you do so in consultation with a lawyer. We have unfortunately come across too many circumstances in which separation agreements are drafted without any provisions regarding rights to a spouse’s estate upon an intestacy or include estate-related provisions which are too broad or ambiguous.

Contemplating and planning for one’s death is uncomfortable and often feels less immediate than so many other life obligations. To make matters worse, there are not enough effective and easily accessible resources for Ontarians to use to inform themselves about the importance of proper estate planning, even while they remain young. This article is meant to serve as a reminder that there are certain life situations in which these unfortunate trends can lead to great problems.

This is part one of a two-part series.

Dying Without a Will – Quiz 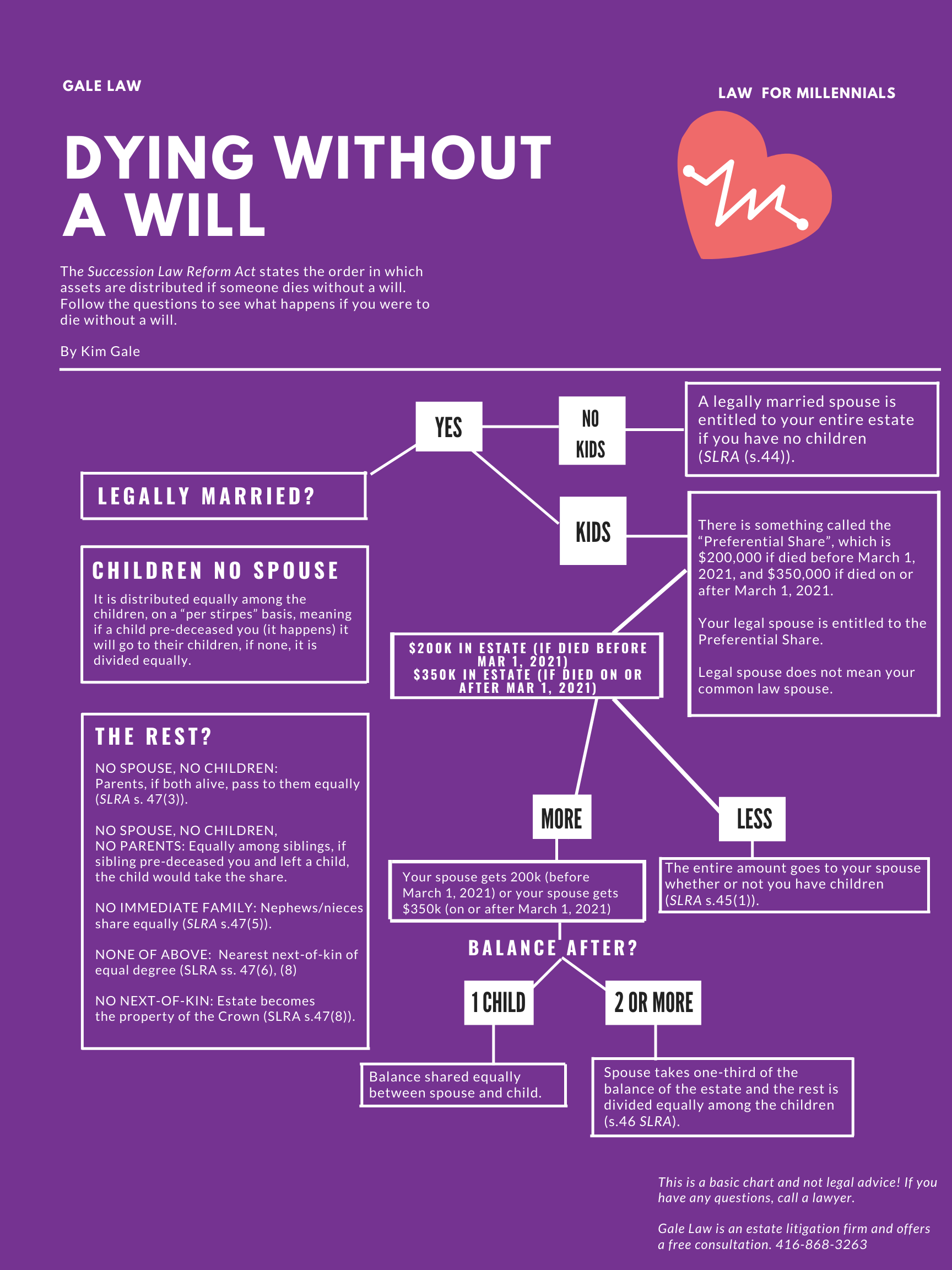 We break down what would happen to your estate if you died with (and without) a will. To learn more about this topic, you may read Kim Gale’s co-authored post on her blog: https://lawformillennials.com/die-tomorrow/

If a loved one passes away without a will, we can help you understand your rights.