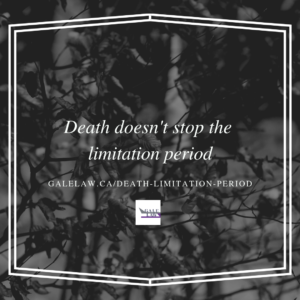 In this case, an estate trustee brought a claim on behalf of a deceased. In 2007, Shui Yee Lee loaned $55,000 to Cesar Ponte. This loan was secured by a promissory note payable on demand or on the sale of a specific property, whichever occurred earlier.

Special treatment for an estate trustee?

The Limitations Act 2002 (the “Act”) sets out in section 4 a basic limitation of two years.

However, section 7(1) states that this limitation period does not run any time in which the person having the claim is incapable (s.1(a)) or not represented by a litigation guardian (s.1(b)). Section 7(2) clarifies that a person is presumed to be capable of commencing a proceeding, unless the contrary in proven.

The estate trustee argued that s.7 of the Act should be liberally interpreted and cited the case Papamonolopoulos v. Toronto (City) Board of Education, 56 O.R. (2d) 1. In this case, Justice Brooke stated that there should be liberal interpretation of the statute of limitations and the benefit should be given to the person whenever his right to sue for compensation is in question.

In Lee v Ponte, the estate trustee argued that a deceased person is incapable of bringing a proceeding. The Act affords for time for a litigation guardian to be appointed and this should also apply to an estate trustee.

Give an estate trustee the same leeway as a litigation guardian?

The Court of Appeal dismissed the appeal by rejecting the arguments of the estate trustee.

The court found that the motion judge was not wrong in dismissing the claim as it was correctly barred by the limitation period. The court stated that the language of section 7 is not “elastic” in the “grammatical and ordinary of the words” to apply to a deceased person.

No – Estate Trustee not same as Litigation Guardian

The Court of Appeal did not consider an estate trustee to be a litigation guardian.

Time plays a vital role in litigation. The Act dictates that generally a person should initiate legal proceedings within 2 years from when the claim is discovered by the person making the claim. Limitation periods exist to provide certainty to all parties.

This decision is a reminder that an individual should bring a legal proceeding as soon as the cause of action arises. Once the limitation period begins and the clock starts, it can only be stopped in certain (‘non-elastic’) circumstances. Even after a claimant passes away, their claim is still subject to the limitation period and it is up to the estate trustee to carry the torch, before the clock blows it out.