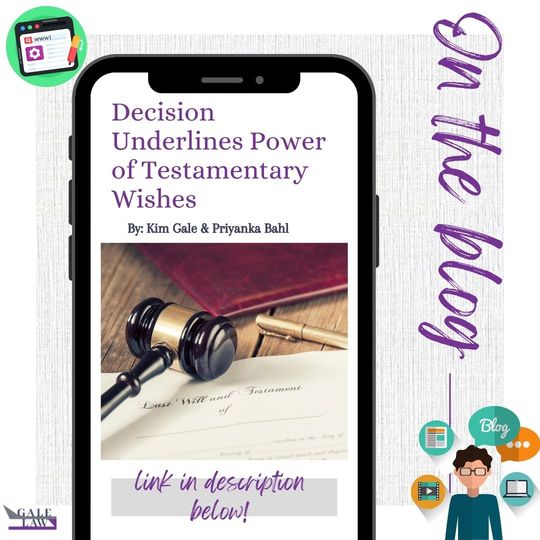 The decision in Walters v. Walters 2022 ONCA 38 outlines the circumstances under which a court in Ontario can intervene with the absolute discretion given to estate trustees, particularly their decision not to exercise their discretionary powers. The Ontario Court of Appeal held that the refusal to exercise discretion in discretionary trusts due to extraneous matters is actionable.

In Walters, the deceased set up a testamentary trust in her will which included a provision permitting the estate trustees, her children, to encroach on capital as needed in their absolute discretion to maintain the “comfort and well-being” of her husband, the children’s father. The residue of the estate, less the capital provided to the father, went to the children.

She appointed her three children as estate trustees, but one of the children ultimately renounced himself. The father asked the remaining estate trustees to encroach on capital to pay a large sum of his living expenses. The estate trustees disliked and mistrusted their father and declined to use their discretionary powers to distribute funds to him.

There are two general categories of trusts: inter vivos and testamentary trusts. An inter vivos is a living trust, which means it is established when the grantor is alive. A testamentary trust is established by a testator in their will and takes effect upon their passing. A discretionary trust is a trust that is flexible and determined by the criteria set out in the trust instrument by the testator, meaning that the beneficiaries and/or their entitlements are not fixed. As seen in Walters, a discretionary trust generally gives trustees absolute discretion in determining distributions to beneficiaries.

Lesson 1: Reduce the conflicts of interest

While a will may grant a trustee absolute discretion to encroach on capital, one should be careful in using ambiguous terms in this context. “Comfort and well-being” is a qualitative term meaning that there could be a range of acceptable living situations. Positing a qualitative term to the estate trustees who have the discretionary power to place their personal interests above their father’s interests creates an enormous potential for conflict. A more practical suggestion could have been to include in the will a provision for a lump-sum or a monthly sum to the father.

Conflicts of interest in estates law may not escalate to the Ontario Court of Appeal, but in this case it did.

This second point follows the first. Estate administration requires the utmost impartiality to execute the testamentary wishes of an individual. In our previous article “Estate trustee checklist” we wrote about the duties and responsibilities of an estate trustee. It is important that the following point is echoed:

It would be difficult to follow the wishes of the deceased when there is a bad relationship between the estate trustees and a beneficiary, and where an estate trustee stands to inherit more by not distributing funds to the beneficiary (despite it being against the deceased’s wishes). In this case, the estate trustees’ distrust and dislike of their father may have clouded their judgment as the court ruled at paragraph 76 that “no reasonable trustees would refuse to exercise their discretion in favour of a monthly encroachment that reflected the $3,875 monthly cost of Gerald’s residence at Rural Roots Retirement.”

Practically, for estates practitioners, a trust company may have brought their impartial perspective and eliminated any conflict of interest fulfilling the impartial duty owed the estate.

Estate practitioners must advise estate trustees to carefully read the wording of the will or the trust instrument. They should also advise clients that testamentary wishes remain paramount in Ontario and that courts may intervene with a trustee’s discretionary powers if “extraneous matters influence the trustee’s decision,” or in other words, if there is a breach of fiduciary duty.

The personal feelings of the estate trustees are secondary to the wishes of the deceased. We have written multiple articles that speak about testamentary freedom in Ontario such as “Decision highlights major difference between B.C., Ontario estate laws” and “The problem of racist wills in Ontario.”

In this case, a discretionary power was expressly permitted under the terms of the deceased’s will to pay for the father’s living expenses. The trial judge found that the trustees refused to exercise their discretion mainly based on their dislike and distrust of their father. The Appeal Court stated that the personal feelings of the estate trustee had “nothing to do with their obligation to ensure his well- being and comfort” as determined by the testator’s intentions, and that “their refusal to encroach on capital to provide for his comfort and well-being was an abuse of their discretionary powers granted under the will.”

Ultimately, the litigation in Walters was decided in favour of the father because of the estate trustees’ failure to follow the deceased’s will. The wishes of a deceased need to be followed as after all, they are the last decision(s) someone makes during their lifetime.

Kim Gale is an estate litigation lawyer and principal of Gale Law, an estate litigation firm in Toronto. She can be reached at 416-868-3263 or [email protected]. She is the author and creator of the blog Law for Millennials — The Complete Beginners Guide to Law and is co-founder of diversity and inclusion group NCA Network. Priyanka Bahl holds a J.D. from the University of Ottawa (2021) and is currently articling at Gale Law in the area of estate litigation. She can be reached at (416) 868-3263 or via e-mail at [email protected].