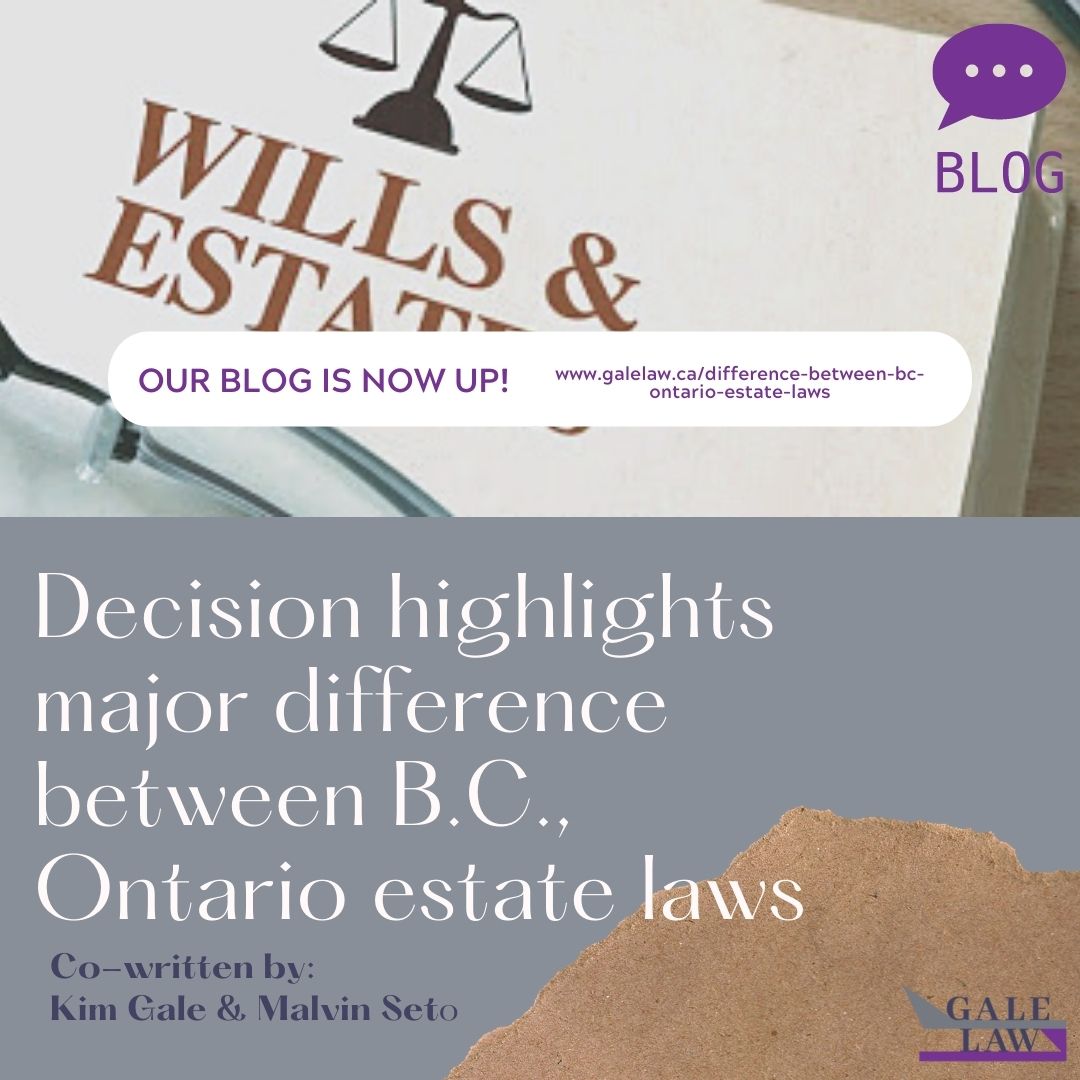 On April 7, 2021, the British Columbia case of Jung v.  Poole Estate  2021 BCSC 623  was released. In  this decision, the testator who had disinherited his daughters in his last will and testament, had his will varied by the court which resulted in the adult daughters being awarded 70 per cent of his estate .

As wills, trusts and estates practitioners it is interesting to see the different approaches in succession law from other jurisdictions. It is unlikely that the same decision would have been reached in Ontario as finality and testamentary freedom are key aspects of Ontario's succession laws.

Section 60 of B.C.'s Wills, Estates and Succession Act (WESA) gives the court discretion to vary a will if the court believes it to be adequate, just and equitable to do so if the court is of the opinion that the will does not provide proper support for the testator's spouse and/or children:

Despite any law or enactment to the contrary, if a will-maker dies leaving a will that does not, in the court's opinion, make adequate  provision  for the proper maintenance and support of the will-maker's  spouse or children, the court may, in a proceeding by or on behalf of the spouse or children, order that the provision that it  thinks adequate,  just and equitable in the circumstances be made out of the will.

Section 60 was applied in Jung v. Poole Estate. The testator fathered twin daughters that he did not want. The mother took full custody of the twins from birth until they were 4 years old - when she passed away. The mother's will stipulated that a couple that she was close friends with should become the daughters' guardians. A custody battle ensued, and custody was awarded to the couple, but the testator was given a generous amount of parenting time.

For Ontario estates litigators, the rules and case law that the court relied on in Jung may shock you.

The court asked if the testator owed a moral obligation to the twins to provide for them in his last will and if so, what provision would the court consider adequate, just, and equitable for the twins in the circumstances to be paid out of the testator's estate. This is where the two jurisdictions start to differ. In terms of varying a will with these facts at hand, the closest that Ontario's Succession Law Reform Act comes to this, is a dependant support claim which would likely have failed here. Ontario allows for more testamentary freedom and as such, does not have a section like s. 60 where an applicant can rely on moral obligation to further their case.

The court in Jung relied on the Supreme Court of Canada case of Tataryn v. Tataryn Estate [1994] 2 S.C.R. 807 for its principles to guide it on its determination of any moral obligations. The test for determining what is "adequate, just and equitable" is grounded in "society's reasonable expectations of what a judicious person would do in the circumstances, by reference to contemporary community standards." [emphasis added] "Only where the testator has chosen an option which falls below his or her obligations as defined by reference to legal and moral norms, should the court make an order which achieves the justice the testator failed to achieve." Societal expectations may allow a court to vary a will, which gives British Columbia courts more power to vary wills than in Ontario.

In regards to the factor of estrangement and neglect, the court concluded that the deceased abandoned the twins from the outset and he had a strong moral obligation to attempt to make up for his desertion of them. He owed a moral obligation to them and failed to meet it during his lifetime .

In regards to the factor of testator's reasons for  disinheritance, the court concluded  that the testator's rationale for disinheriting the twins was invalid, irrational and not based on what a reasonable testator judged by contemporary community standards would or should have done. The court concluded that the testator failed in his last opportunity to behave like a judicious father and recognize his moral obligations to the twins .

The case turned on moral obligations, a B.C. principle, and the court varied the will to make adequate, just and equitable provisions for the twins. This included adding the non-estate assets (Tax Free Savings Account with a beneficiary designation) into the estate assets. The twins were each awarded 35  per cent of the  estate and this meant that  the decision  directly  went against the testator's intention to disinherit them.

Spence v. BMO Trust Company 2016 ONCA 196 is an Ontario Court of Appeal case that stands for testamentary freedom . You can read more about the case and its analysis in our previous article in previous article, The problem of racist wills in Ontario. Essentially,  it  is not  open to  courts to scrutinize an unambiguous and unequivocal disposition in a will, with no discriminatory conditions or stipulations.

In Spence, the father ceased communicating with his daughter during the final 11 years of his life and updated his will to exclude her because she, as a Black woman, married a white man. The daughter's claim that the will made by her father was discriminatory and undermined public policy was initially successful but overturned at the Ontario Court of Appeal, even with strong third-party extrinsic evidence.

Had a similar provision to s. 60 of the WESA been in place in Ontario, or had Spence occurred in British Columbia, applying the factors and rationale from Jung, there may have been a different outcome for this landmark Ontario case. Perhaps Jung can start the discussion on how Ontario can review and reconsider the balance Spence struck between testamentary freedom and discrimination .

British Columbia's strong belief in moral obligations directly contrasts Ontario's love of testamentary freedom. Yet both ideas are foundational to each province's understanding of succession law. Both have its positives, and both have its drawbacks. It is difficult to say if one set of laws  is better than the other. However, what is certain is the evolution of the law. B.C. and Ontario can learn from each other's succession laws and move towards justice for all.