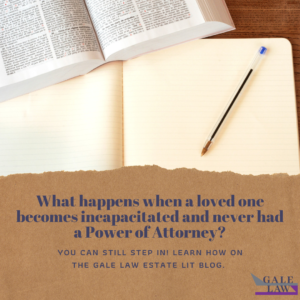 Guardianship – When There is no Power of Attorney in Place

By: Kim Gale and Gabriela Caracas

The average person does not give much thought to giving someone authority to act on their behalf though a Power of Attorney (“POA”), that is, until they are at a lawyer’s office. A serious medical issue in which incapacity becomes an inevitable reality for mom and dad may mean that it is too late for them to draft a POA.

It is not uncommon for people to live their entire lives not knowing what a Power of Attorney is, but need it when it is too late. When is it too late? In order to have a valid Power of Attorney, capacity is required at the time of creating the document. If you are already incapacitated and incapable of making personal and financial decisions regarding your affairs, you are not capable to designate someone to handle those for you.

So what happens then when your family member or close friend becomes incapacitated and never had a Power of Attorney? You can still step in to help someone close to you by being appointed as their guardian.

Both the Office of the Public Guardian and Trustee (PGT) and the court have authority to appoint guardians.

The PGT can appoint a guardian in instances where they are already acting as a guardian for the incapable person, and in turn appoint another individual, such as a relative, spouse or partner, to act in their place. In this scenario a court order is not required and you can submit two forms to the PGT for consideration – (1) Application to replace the Public Guardian and Trustee as Statutory Guardian of Property, and (2) Management Plan.

The court will consider the following in making determinations under guardianship applications:

Despite the fact that not all is lost when someone becomes incapacitated and does not have a Power of Attorney, it is still advisable to pursue the necessary steps to have one drafted before it is too late. By having a Power of Attorney, you are the ultimate decision maker,  and you do not have to leave such an important decision at the hands of the PGT and/or court.

It is important you contact a lawyer to better understand your rights.

Gabriela Caracas is an Associate at Fogler, Rubinoff LLP who practices litigation and is growing her practice in estate litigation.