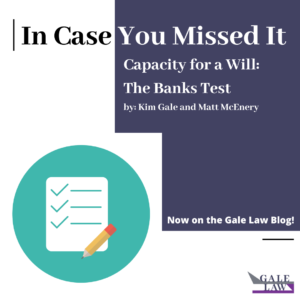 By Kimberly Gale and Matt McEnery

The test for testamentary capacity was established in Banks v. Goodfellow L.R., [1870] C.C.S. NO. 69, and has survived until the present day. While the case has endured as the benchmark of testamentary capacity,  much  due to the judicial foresight of Chief Justice Alexander James Edmund Cockburn, it has not been without criticism. It is hard to imagine Justice Cockburn foreseeing the depth of medical research into diseases such as Alzheimer’s, which we now rely upon in the present day, but the considerations he included in  his test remain.

The practitioner will inevitably be faced with clients whose capacity will be in question and a thorough reading of this case is important while considering instruction. With that said, a concise capacity checklist based on the case should be well versed in every practitioner’s mind.

Prior to Banks, under English statute, all testators were required to be of sound mind and the courts would interpret as such. Banks changed this interpretation that capacity could not be an automatic assumption from a diagnosis. Justice Cockburn formulated his test not on the fact that an assumption was “diagnosis-bound” but that no assumption would be based on a diagnosis.

While Mr. Banks had frequented the “country lunatics asylum,” he had managed his financial affairs carefully and shown himself to be capable in his business dealings. After the passing of his sister, he had changed his will in favour of the daughter of his deceased sister, which the court deemed as a rational change. The court will always try and respect the testator’s wishes.

As stated in Banks:

Evidently, the ability to provide instruction for a will is not enough. The testator must understand what they are saying while giving instructions. If a practitioner feels uncomfortable with instructions, it is best to immediately stop work and carefully note all the issues or request a capacity assessment.

While a capacity assessment is persuasive evidence, it is not always determinative. In the British Columbia’s Supreme Court 2002 decision Fuller Estate v. Flurry 2002 BCSC 1703, the testator had   a falling out with his children and went to a lawyer to change his will and disinherit them. The solicitor was concerned over this radical change and asked the testator to seek a medical opinion      as to his capacity. The testator obtained this medical evidence and a new will was made.

The court decided that his delusions were not easily recognized and despite his medical record, the will was invalid due to his delusions. Evidently, a doctor’s note is not the only piece of evidence the court will consider when determining capacity of a testator.

In Sweetnam v. Williamson Estate 2017 ONCA 991 the testator, who was suffering from terminal illness, made two separate wills on separate dates leaving different portions of his estate.

Applying the test from Banks and following the leading jurisprudence, the Ontario Court of Appeal found that the trial judge had been correct in finding that the testator lacked capacity.

It can be argued that Banks should be updated to address the modern complexities of medical science pertaining to capacity. For example, Justice Cockburn’s test could not have envisioned the medical difference between dementia and Alzheimer’s disease and was more narrowly focused on psychosis.

However, it appears that Banks remains the test for capacity which takes a holistic approach as medical evidence, if available, is not the only evidence that will be relied upon.